The whole installation in the ambulance is connected to an insurance box which is located in the patient’s cabinet. There is a system in this box in order to take precautions against leakage current and control the current circuit. Also, there is a master key that enables to open and close the entire electrical system safely in Toyota Hiace ambulance. This key is located on the left side of the steering wheel in the driver’s compartment. It closes itself without no need any intervention coming from outside in 30 minutes when the ambulance is stopped.  There is a touch panel system which enables to control the entire electric system, such as lamps, air-conditioning, and the heater, of the ambulance in the cabinet. Also, there is a cooling fan that moves in automatically in order to prevent overheating.

The whole cupboard system is manufactured from 3mm thick foamboard material whose external surface is covered with PVC covering. The patient compartment’s external surfaces can be formed as orange or white. Foamboard material used for covering the ambulance’s cupboard has 17mm thickness. The cabinet shelves are produced using foamboard material which has 10mm thickness. Toyota Hiace ambulance cupboards and their coverings are fireproof and compatible with 95/28/EC norms. There is a long cupboard with shelves that installed with a defibrillator, ventilator, vacuum aspirator used in the ambulance in the left side of the patient cabinet. Each device has its own independent electric socket. Also, there is an explicit oxygen outlet socket for the ventilator device.

There is a cabinet system in order to facilitate placing the medical bag, using in the vehicle, first aid kits, and the medicines in front of the patient cabinet partition. This system is located totally counter in case looking the vehicle from the rear of the ambulance.  These cabinets are manufactured as one piece. Their height is 140 cm, depth is 40 cm, and the width is 25 cm. These measures can be changed if the user requests. The entire cabinets in the ambulance have a special rail system. It is used a safe lock system in the ambulance while the vehicle is in motion.

The drawers have a special lock system. They are not opened while the ambulance is in motion. in fact, they have a special security system in order to prevent drawers to make noise and vibration. There is a workbench with plastic alloy on the cupboards in order to enable the attendant to prepare easily the materials such as injection, medicine, and serum. This workbench is openable and closeable, manufactured as one piece, antibacterial, and can be cleaned easily.

There are two lamps, having a stimulant system and warning voices, with a led system on the ceiling. It is used with a hand control located in the driver’s compartment. There is a rear projector system in the headlamp as buried on the backside of the vehicle. The ambulance rear led lamp works automatically via a switch when the back door is opened.  There are four armature lamps with led and two spot lamps. Spot lamps can be used in case of insufficiency of armature lamps. These lamps are located in the vehicles’ internal ceiling and can be controlled simply with the ambulance’s digital control panel.

-The Lighting Of The Ambulances’ Rear Area

There is a rear led lighting system on the condition that there is inadequate light in order to supply the patient’s input to the Toyota Hiace ambulance. This system starts to work in case the back door stays open for more than 10 seconds.

-Heating Of The Patient Cabin

There is a heater that works with diesel or aqueous system located under the medical device cabinet. Heater with diesel fuel works independently from the vehicle’s engine. There is no need to work the ambulance’s engine in order to heat the patient cabin. The heater has its own thermostat and it moves in automatically when the warmth decreases.

There are six lateral lamps that spread the blue color based out of the ambulance. Lateral lamps work in sync with the headlamps and controlled with a hand control located in the drivers’ compartment.

Toyota Hiace ambulance turns 12 direct current’s 220v, taken from the vehicle’s battery, to alternative energy. Later, it sends that energy to 4 sockets which are situated in the ambulance cabin. 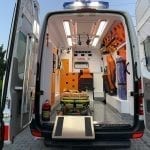 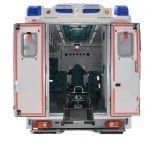 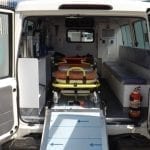 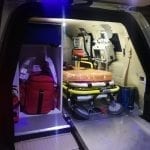